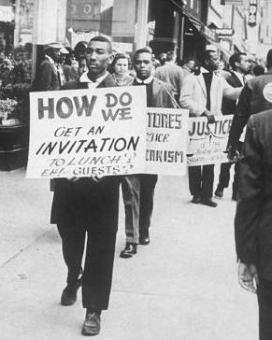 It has been said that I do a lot of complaining about conditions in the traditional black community but offer little in the way of ideas for a solution. That may be a true assessment. If somebody backs up and takes a look at the scope of problems that faces the black community it is very reasonable to say that in many respects I have woefully little to offer to solve these problems. I don’t have a problem with that opinion. Actually, I think it is totally unreasonable for someone to think that I am going to come along and offer a solution to the subjugation of the black community all by my lonesome. After four hundreds of years of varying forms institutionalized subjugation that ranges from active enslavement to passive continuation of the status quo that has been perpetrated by millions and millions of people on both sides of the racial divide, it would be rather unfair for someone, anyone to think that I suddenly have all of the answers or that I am capable of engineering solutions for this mess of epic proportions. But inevitably, people will respond to my blog with a condemnation of my message because I offer little to nothing as a solution.

Even if I had all the solutions and a plan for their implementation how in the world can one black man with nothing more than a blog influence a country of well over three hundred million people to accept these solutions that can liberate the black community? With more than seventy percent of the population considered white the vast majority would actually benefit from keeping things the way they are.  The black population would have to work with near complete unity to get any solution for our emancipation realized. Unfortunately, unity in the black community is about as likely as a strange guy in a seriously modified Delorean with a flux capacitor pulling up in my driveway and giving me a list of every winning number for every lottery on the planet for the next fifty years.

Some black people are too wrapped up in the modern capitalistic culture that focuses on being totally selfish and socially irresponsible in their attempt to perpetuate every racial stereotype the dominant culture uses to justify the subjugation of the black community. This minority segment of the black community is more than happy to be used to reinforce every negative stereotype. While most of these people are content to do whatever to eek out an existence some of these individuals are so ethically challenged that they abuse their neighbors like the proverbial crab trying to pull other crabs down in the crab box. These behaviors make a lot of black people afraid to leave their homes for fear of being robbed. Black people are afraid to leave their car in the street because it may be stolen. Black people are afraid for their children because they have to walk to school through a neighborhood that looks like a war zone at times. Black people are concerned about the man or woman standing on the corner nearly any and every hour of the day. This list will go on as well. It’s a brutal dog eat dog world out there in the black community. And a lot of black people are living under the stress of it all.

And yet somehow we expect people who talk about these conditions to be the ones to have all the answers for a solution. Nobody calls the newsroom of the local television station and complain because they report all of the happenings in the community without giving a solution. Nobody tells the person who calls 9-1-1 and reports a fire to get their own fire truck before they have the audacity to bring people’s attention to the fact that somebody’s house is burning down. The fire alarm isn’t covered with a sign that says “break glass in case of fire only if you have a solution.” But somehow, for some reason, we expect those of us who are vocal about the disparity in the black community to have the answers in order to give our observations legitimacy.

As far as I know the only person that should be reasonably expected to have a solution to this problem is the somebody who is trying to get a job promising to do something about it. Politicians are required to have a solution for problems because they want to be the ones the community hires to correct these  predicaments and others. If they want the job they’d better have some kind of solution or plan of attack or something to demonstrate their qualifications for getting the job done. These people advertise themselves saying things like, “I’m the one who knows what to do to end poverty, not my opponent.”  But, nevertheless, whenever the next politician gets into office somehow the war on poverty seems to linger while the financially wealthy get tax breaks totaling trillions of dollars.  Our politicians are no longer expected to adhere to what they promise.  It should be easy to see how our collective expectations on people who talk about racial disparity is totally unfair and undermines the observations of disparity. People are very quick to say something to the effect that if people don’t have a solution then they are doing nothing but complaining and nobody has time for that.

In all honesty, there are a ton of solutions that are regularly dismissed without any serious consideration on their merit. Universal healthcare would do much to help alleviate the racial disparity associated with health. But all too often people will say that universal healthcare is just way too expensive and will bankrupt the country. The argument of cost may have some substance if the leadership of this country wasn’t so gung ho to start a war well on its way to costing a trillion dollars and more than four thousand American soldier’s lives with such a questionable benefit to national security. But just saying it would cost too much gives people who don’t want to see the racial gap in healthcare eliminated or even reduced a reason to say no.

Another idea that would help eliminate the racial disparity inherited in our legal system that is more than ready to come down harder on an African American that a European American would be to develop a legal and justice system that truly operates independently of the color of a person’s skin or the size of their wallet. Without the benefit of knowing the racial identity or ethnicity of an individual the blatant influence of prejudices can be eliminated as a factor in our judicial system. It would also help if the country would develop a system of laws that actually protect people who can’t protect themselves instead of allowing members of the white privilege from continuing to grow their privilege while others suffer. But to even suggest these ideas is to invite the ridicule and rancor of the establishment and the people who have consciously made the choice or who have been subconsciously manipulated into the defense of the status quo.

4 thoughts on “Expectations For Expecting Answers”