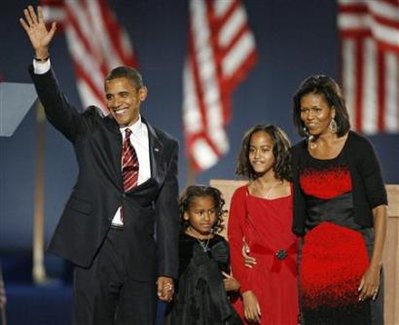 I really, really tried last night.  But no matter how hard I tried to stay awake, the sandman would not be denied.  I fell asleep about nine Central Standard Time, about ninety minutes before Senator John McCain gave his concession speech.  I had fallen asleep on the couch and woke up to go to bed when I heard Mr. McCain’s voice.  I don’t remember exactly what he was saying, but I heard enough, he was conceding.  It registered on my sleepy brain that Mr. McCain, but I don’t think it registered that Mr. Obama won.

Ms. Peacemaker and I started tracking the polls about six thirty in the evening.  Mr. McCain was first on the board with eight votes to Senator Barack Obama’s three.  I think that was the last time Mr. McCain was in the lead.  At one point, the polls had Mr. Obama with about one hundred electoral votes to Mr. McCain’s thirty eight.  Mr. Obama pretty much was enjoying a two to one lead.

Now, I don’t know what officially makes a political landslide, but the 2008 election should be considered a prime example on the national scale.  But all night long the people monitoring the election claimed that the race was close and that Mr. Obama failed to flip some crucially needed traditionally Republican voting states.  When there were two hundred electoral votes for Mr. Obama and ninety for Mr. McCain, a few minutes before I lost consciousness, I figured all Mr. Obama needed was to win two more states, Florida with twenty seven votes and California with fifty five.  With consciousness quickly fleeing away I knew it was pretty much in the bag.  It was virtually impossible for Mr. McCain to overcome his more than a hundred vote deficit and pull off an upset.

Regardless, I woke up to an expected surprise!  The forty fourth president of the United States will be the first president who is not known as a hundred percent Caucasoid male.  President Barack Obama will be the first visible minority president.  More than two hundred and thirty years after the birth of our nation we finally have a little racial variety in our highest executive office.  The historic nature of the occasion is monumental.

But then again, the challenges ahead of him and the rest of America are truly monumental.  No president has ever come into this office facing the variety of problems that await Mr. Obama.  Yes we may have had a president that had to face a great depression early in the twentieth century.  Yes we may have had presidents that had to guide the country through wars.  But now we have an economic crisis of its own monumental proportions, a war fueled by differences in ideologies in two countries, a healthcare crisis with so many Americans losing everything including their lives, global competition as well as global animosity for the previous administration’s unilateral global policies, and so much more.  We voted for the black man to lead the country after the last white man screwed it up so royally.

Voting for Mr. Obama is only the first step.  He is not a dictator of a nation but a leader.  His predecessor, President George Bush, was at one time fond of saying that he is the decider who controls the fate of this country.  But if this election has done anything it has drilled home the fact that it is the collective people of America that are the deciders of this country.  The president might feel like he, or surely one day she, can operate with personal impunity, but he leaves the rest of his or her party to face retribution.  It wasn’t Mr. Obama who was the greatest contributor to the defeat of Mr. McCain but Mr. McCain’s association with an immensely unpopular president who explicitly and implicitly said that he didn’t give a shit about what the American public thought.

Mr. Obama goes into the presidency with the momentum of the world behind his back.  This great victory was achieved with a great deal of effort and coordination of people around the nation.  Mr. Obama cannot do it all alone.  He needs the help of the American people and he needs to stay accountable to the American people.  A lot of people supported Mr. Obama because they felt he was truly the best man for the job.  But on the other hand, there are a lot of other people who voted for Mr. Obama simply because we felt he was the lesser of evils.

If anything can be learned from the story of George Bush it is that the support Mr. Obama may enjoy today can evaporate quicker than a snowball in the hottest pit of hell.  He needs to remain focused and he needs to remember who he serves.  It was the people who donated the most to his political effort.  A lot of people wanted to see change.  Business as usual is not an option.  Two years from now there will be another national election and the Democratic Party that is firmly in charge of the legislature and the executive branch will be held accountable.  I strongly suggest that he, nor anyone else in politics, doesn’t continue the tradition of taking the people for granted.