A few weeks ago I took my 4 year old son Christmas shopping. At the church we attend, our family participates in a yearly charity sponsored by Samaritan’s Purse called “Operation Christmas Child”. We pack a shoe box with a variety of gifts, which is sent to children in “Third World” countries. I pack one for a boy while my wife packs one for a girl.

I took my son to help me pick out the gifts. I want to instil in him the understanding that Christmas isn’t about “him” getting gifts from Santa Claus, but that during this time of year it is more important to give to those who don’t have as much as we do. So as we shopped, we had a conversation about what Christmas really means and how we celebrate this season as a family.

I went on to explain that Santa Claus isn’t a real person but he is “pretend”. I impressed upon my son that his mother and I, as well as our friends and family members buy him the gifts… not only during Christmas but all through the year. I further explained that the reason we are buying these gifts for the boys and girls is that their family and friends don’t have the extra money to do so and there is really no Santa Claus to bring them presents.

I could see that he was listening intently while his little mind was processing what I was telling him. He understood what I was saying, but he still wanted to believe that Santa Claus must be real. That’s what he sees on television. That’s what he learns in school. That’s what people are always ask him: “what do you want for Christmas from Santa?”

Since that day we have had a number of conversations about the meaning of Christmas. If you ask him now what is Christmas, he answers that it’s Jesus’ birthday. If you ask, he’ll say that Santa Claus is pretend, although it is evident that he still wants to believe that he is real.  He’ll tell you that his mommy, daddy, friends and family buy him his gifts… that they don’t come from Santa. I explained to him that we give each other gifts just like the 3 wise men brought gifts to baby Jesus when he was born and as a way to remember that God gave us the gift of his Son Jesus.

At four, I don’t expect him to understand and accept it all. However, we’re not allowing him to be conditioned by our society’s values into being self absorbed and materialistic. Furthermore, I don’t believe it’s healthy for black children (especially boys), to be conditioned to believe that all good things come from a white man… a fat old white man with a long white beard at that. I believe it subconsciously undervalues their appreciation for the efforts of their parents (especially their fathers), it further undermines their own self esteem and respect for black men as a whole, and it grooms them to be easy prey for that seemingly nice (old) white man.

In his own way, my son does show us that he has an understanding of the true “reason for the season”: the celebration of the birth of Christ, the love of God, family and friends, and that it’s better to give than receive. So far he hasn’t asked us for even one present.

This is the Christmas lesson we want him to learn and incorporate into his life. 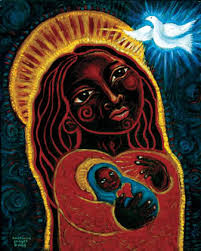 3 thoughts on “A Christmas Lesson”