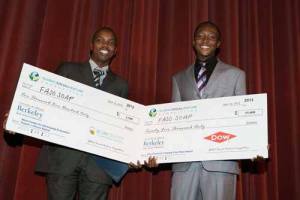 In 2010, 219 million people were affected with malaria, and out of that number over 600,000 died. Malaria is also one of the leading causes of death in Central Africa.

Two students in Burkina Faso, pulled their science knowledge and resources together to invent a mosquito repelling soap in order to prevent malaria. Gérard Niyondiko and Moctar Dembélé, both students at Intsitut International de l’Eau et de l’Envirronement de Ouagadougou (International Institute of water and environment) in Burkina Faso, were awarded this year’s Global Social Venture Competition (GSVC) $25,000 Grand Prize. The GSVC is the only international competition of Social Business Plans, dedicated to students, young graduates, and entrepreneurs with high social and/or environmental startups. They are also the first student team from Africa to ever win the Grand Prize.

“The soap will be available first here, and then given to NGO”, Gerard Niyondiko, Technical Manager of Faso soap said in a video that was posted online today.

Their invention, called Faso Soap, is made from karate citronella, and other herbs found locally in Burkina Faso, that are still a secret.

“We want a simple solution, because everyone uses soaps, even in the very poor communities”, Moktar Dembélé, General Manager of Faso soap said.

2. How China has created a new slave empire in Africa

3. Afro-Futurism: The Marketing of Revolution