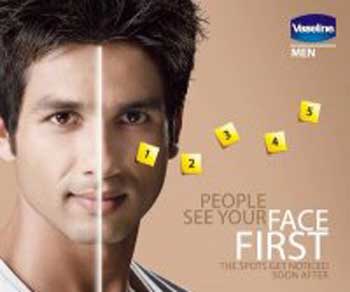 Vaseline's Facebook App and Advertisement for their face whitener for men

Colorism is happening, not only with Africans throughout the diaspora, but also with our equally melanated Indian brothers and sisters. I was surprised, but not surprised (if you know what I mean) to learn of the rampant colorism that’s happening in India. I have heard of the color caste system in their culture, where the darker skinned people, suffer more discrimination and poverty. India has a strict a centuries old, color caste class system, which has been exacerbated by centuries of British and Portuguese colonial rule. (I think it probably arises from it)

About thirty years ago, many American cosmetics giants wormed their way into the Indian culture and started advertising and selling their “skin lightening” products to Indian women.  The Cosmetic giants  are now entrenched in India and are exploiting the Indian people’s misplaced desire for lighter skin for all they can get out of it, and it’s worth billions of dollars! Revlon, Avon, Estee Lauder and other cosmetics giants are manipulating the insecurities of the people with their blunt advertisements for skin lightening products with names like: Refined White, Absolute White and Cyber White EX, (Cyber White EX, WTF?) and it’s aparent that the people are buying into this madness big time. What’s interesting is that those cosmetic firms which have traditionally targetted Indian women, are now, in unchecked greed, going after the men! Last year there was the brouhaha about the Facebook application that could allow users to lighten their profiles.  This whole thing was a campaign launched by Vaseline, and the ad promised to “unleash what was hidden underneath your skin!”   (Another WTF)  In true Madison Avenue tradition, they simply use a famous Bollywood actor in their ads, but in India they go hard!  There is no euphemistic wishy washiness—they just show the actors face split in half:  one half its regular dusky color and the other half lightened.  Aparently this approach worked well, and many MEN bought into this.

I’ve been saying it for years. It’s the media that perpetuate the cultural stereotypes. They understand the peoples’ psychology all too well, even if the people of color themselves don’t, that their oppression by whites creates their self hatred.   The people are psychologically vulnerable, and ripe for the pickings.  So then all the Corporate Cosmetic giants have to do is come in behind and sell a pipe dream to the spiritually broken people. Subliminally, sell the dream of looking more like your oppressors, thereby being a better person and having a better life than you could with your natural dark skin. We saw this sublimation here in North America, then in Africa and it probably occurs anywhere that dark skinned people are being oppressed by white skinned people. The desire to be something other than one’s dark skinned self is so strong that these products truly sell themselves.  They fly off the store shelves. To top it off, the Cosmetics giants have no responsibility for the blatant immorality or even the safety—they can blame it all on the color caste culture of the people, so in effect it becomes the people’s fault that they are oppressed and miserable.  After all, the people WANT these products!!

Thankfully, the people of India are fighting back against this onslaught of, dare I say, spiritual violence! Many groups are popping up to deal with this and there are certain Bollywood actors and actresses who refuse to be a part of the marketing of these horrid products that exploit and destroy their people spiritually. It’s such a terrible thing the way capitalism devours.

I found an interesting Indian blog called Sepia Mutiny (love the name) and they addressed this issue and posted one of the commercials ads. (the link to the article is above) In the ad a sad depressed dark skinned young man couldn’t get a girl’s attention. A properly lightened friend schooled him about using “Fair and Handsome”, a cream made just for men “rough skin instead of using the creams made for women’s soft skin”.   So the depressed guy used the product, turned 4 shades lighter, got the girl and lived happily ever after! That particular post got 289 comments and counting as young East Indian commenters throughout their own diaspora discussed this important topic concerning their own skin issues. I can’t help but feel a kind of De ja vu as I watchd the video and read some of the commentary about this very compelling topic.

I hope that the Indian people continue to fight to overcome this assault, bit by bit. It’s just another instance of oppressed people of color being further manipulated for the benefit of these huge corporations for which NOTHING matters but the money in their bottom line.

Just as an addition to this article:  I was recently informed of reggae artist Vybz Kartel, who has drastically lightened his skin and has incurred the wrath of his fans!  Not all.   It’s so sad that someone would go to these extremes to be considered acceptable to those who will never accept you.   Vybz is now a very cheap version of a light skinned black man, when he was a full version of his beautiful dark skinned God appointed self!  Many say he looks like a corpse, rather than a browning!  But he thinks he looks fine.  Well!

1. On this date 150 years ago, November 24th 1859, Charles Darwin published “On the Origin of Species by Means of Natural Selection”. Back then it was seen as a challenge to the religious ideology and establishment of the day. I remember reading it when I was in university and I found it… well in a word: boring. I didn’t understand the furor it caused then… and even now for that matter… but as a Christian I have never felt threatened by other ideologies, whether they be religious or secular.

Today, a few of the online magazines and blogs which I read regularly,  mentioned this milestone and referenced the debate between evolution and religion, primarily Christianity. Most of the commentary, regardless of the authors’ personal beliefs, tried to probe the issue in a non-judgmental way. However, there were a couple that held the view that if you believed in evolution, you were condemned to hellfire… or if you believed in creationism, then you were an ignoramus who rejected science and believed that the earth was flat. As a born-again Christian, I believe in the infallibility of the Word of God (The Bible) and also in certain aspects of evolution. So I’m not sure where that would place me in each of their eyes.

As I have researched and discussed this topic over the years, I have found that just as there are a variety of scientific theories around evolution, such as Darwinian Evolution, Social Darwinism and Scientific Evolutionary Theory, there are also a variety of religious, particularly a variety of Christian beliefs around creationism. I found that there are creationists, who are different from creation scientists, who are different from those who believe in intelligent design, who are again different from theistic evolutionists. Catholics, Protestants, Evangelicals and other denominations have varying beliefs on evolution. This topic is not as simple as the simple-minded on either extremes of this debate would have us believe.

For those want to broaden their outlook and take a more rational approach to the debate, one of the online resources I frequent, The Pew Forum on Religion and Public Life, has provided an extensive research package on this debate (see here). There are many interesting and informative topics which are discussed from a variety of angles… religious, scientific, political, social, personal, etc.

Although I always say that you need to believe in something or you’ll fall for anything, I am also always reminded by the words of St. Augustine, a theologian in 400AD, who said this in reference to the Genesis account of creation… way before the Darwinian evolution vs. Religion debate:

“In matters that are so obscure and far beyond our vision, we find in Holy Scripture passages which can be interpreted in very different ways without prejudice to the faith we have received. In such cases, we should not rush in headlong and so firmly take our stand on one side that, if further progress in the search for truth justly undermines this position, we too fall with it.”

2. I want to share a very interesting article on a blog authored by Lovebug35 entitled: “Racial Diversity in India”. What I found most fascinating is that the first inhabitants of India are the Australoids, who “are generally of dark complexion with wavy hair, broad nose, weak chins and these people form the slum population in India.” Within the Indian Caste system they are at the bottom of the rung and are referred to as “untouchables”. At the top of the caste system are the Indo-Iranians also known as “Aryans” (original Aryans… not the Hitler type), who were the last group to migrate to India. They “are characterized by their pale/fair complexion, narrow noses, long faces with prominent chins and have a variety of hair and eye colors.” It was these Aryans who instituted the caste system.

Well worth the read with lots of photos of each racial group.

(As an aside, this reminds me that I need to finish my post on Sammy Sosa and the whole skin bleaching controvery… coming real soon!)

3. Jamaican Dancehall Reggae star, Beenie Man, has been dropped from a music festival to be held in Australia and New Zealand due to protests and petitions from gay rights groups (see here). They objected to his appearance at the “Big Day Out” festival because the lyrics of some of his songs promote violence against gays and lesbians. Activist refer to him as a “murder music artist”, similar to issues surrounding another Reggae artists Buju Banton, as I had previously discussed in this post.