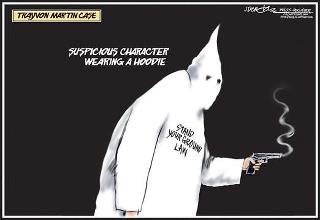 The world of American politics, especially presidential politics is blatantly and unashamedly opportunistic. It’s all about hype, slogans and who can capitalize on the latest story capturing the short attention span of the fickle public in the 48 hour news cycle, and/or trending within the world of social media.

Mitt Romney, Rick Santorum and Newt Gingrich can learn from the master politician, President Barack Obama, on how to jump on an opportunity like a pit bull on a 4 year old. When Rush Limbaugh referred to Sandra Fluke on February 28th as a “slut” and “prostitute” for voicing her support for birth control during an unofficial House Democratic hearing, 2 days later she got a call from the President asking if she was “okay”. The parents of Trayvon Martin, a black teenager who was murdered in a racial motivated shooting on February 26th, has received no call (as yet) from the President to ask if they were “okay”… and they probably won’t.

See… Obama knows he needs the white woman vote to get re-elected, so he strategically decided to show empathy for Fluke’s hurt feelings when she was called a couple of derogatory names. On the other hand, he knows he’s got the Negro vote sown up, so why would he need to show any concern for their pain? Why risk his re-election by being accused of showing favouritism (i.e. sympathy) to people with the same skin colour as him in their time of grief for their murdered son… a grief caused by the imbedded racist attitudes of the “other” people he needs to support him for a second term in office?

The Republican contenders should take a page from Obama’s playbook and call Martin’s parents to offer their condolences. They should also put on a hoody, have a bag of Skittles in one hand and an Iced-tea in the other, take a pic and post it on their Facebook page with the caption: “We’re All Trayvon Martin!” Sure it’s blatantly insincere and strategically opportunistic, but that’s what American politics is all about. It’s about taking advantage of the hot story and manipulating the story line for your own benefit. After the Fluke affair the media was on them, particularly Romney, for not calling Fluke or publicly admonishing Limbaugh, especially after President Obama did so. By calling the Martins, maybe the media… and African-Americans… may finally wake up and realize that “Barack Obama doesn’t care about Black people”. The republicans may even get a few more black votes.

Hmmmm… I doubt it.

“I stated that Kony 2012 is pro-imperialism, pro-militarism propaganda.  Again, here is the link to the article explaining my position.  http://new-possibilities.blogspot.com/2012/03/kony-2012-is-imperialistic-propaganda.html

Most of you have not provided any logical arguments refuting that assertion.  Instead, many of you have resorted to ad hominem attacks. It is easy to call me “Negro pseudo intellectual”  and “only a mouth”, question my level of activism and make disparaging remarks about African Americans.  It is far more difficult to challenge my argument.  I challenge you to debate me on substance.”

@Ana..I did not “deny that some blacks have been and are the enemies of other black people”.  In my article, I condemned Joseph Kony and called for him to be brought to justice. All groups, including black people, have their traitors. I never said or implied that the victims should wait. I said that Africans should and can solve their own problems. Anson Asaka

First, I had made it quite clear in my previous post that the article and term “Negro pseudo-intellectual” wasn’t directed at nor a personal attack against you. I also directed you to analyze my definition and clearly stated: “My definition is above and if you personally don’t fit into that category, then it doesn’t apply to you.” However from your above statement: “It is easy to call me “Negro pseudo intellectual”,  I can only surmise that you did analyze my definition and have determined that you do fit into that category. I will therefore defer to the substance of your superior logical argument and surrender that point to you.

Secondly, I did read your well written and well researched article explaining your position. Interestingly, I found it ironic that all the sources you used as the substance of your logical arguments were taken from “western organizations”, as you previously branded Invisible Children. You freely quote Wikipedia, ABC News, Washington Post, Christian Science Monitor, Council of Foreign Affairs, Amnesty International and the Wall Street Journal. You are correct that I didn’t challenge or debate you on the substance of your argument. However, if I ever do wish to challenge or debate the substance of logical arguments based on an eurocentric point of view, I’ll find a white man to debate with… and not one of his black surrogates.

Thirdly, I have observed that when those of African descent outside of the USA, don’t conform to the narrow-minded beliefs, opinions and logical arguments of our African-American brothers and sisters… and have the audacity to be critical of your arrogant view of the world, you make accusations that we “make disparaging remarks about African Americans.” I have discussed this attitude before in my post and adjoining comments: “African-American Arrogance”. I invite you read the post. You may learn something about people of African descent who are not African-Americans. You may also learn something about yourself.

Some people are lucky, others are not. Senegalese strong man, Abdulaye Wade is among the luckiest old men even though he behaves like an adolescent. Had it been not for divided and ever-greedy opposition, Wade would have been history now. Voters gave him a very heavy blow in the first round. He secured a leading of 34.8%, ahead of his former protégé and PM, Macky Sall who garnered 26.5%. Other former PMs took third and fourth place: Moustapha Niasse with 13.2% and Idrissa Seck with 7.8%.

Such low votes speak volume and signify defeat. This translates into the fact that had the opposition backed one candidate, the results would have been Sall 47% and Wade 34.8%. Again, there wouldn’t have been any run-off that Wade can use to rig votes to fulfil his power-hunger to remain in power.

In other words, Senegalese were able to get rid of Wade in the first round had it not been for the opposition to help him secure a second chance of survival. Will Wade let it go easily without applying traditional African science of survival-rigging and cheating? Shall this happen. Will the people and their weak opposition bite the bullet or give him a hard time once again?

One thing though is obvious that Wade showed maturity for not rigging in the first round. Is it because of being cornered, his belief in democracy or the result of over confidence that he’d have won in the first round? If he allowed justice to take its course, will he keep this maturity or cascaed back to his dreams of dying in power?

Although Abdulaye Wade, managed to tamper with the constitution to be able to run for a third time aimed at remaining in office, will he manage to manipulate the votes and get away with it? Results conclusively indicated he did not make it outrightly in the first round. This of course dented him badly. Sall gave him a spirited fight so as to change Wade’s tone from braggadacios to conciliatory one. Will this become Wade’s Waterloo?

The ballot box can still boot Wade out if not to tame him. Senegalese should maintain the momentum they displayed in the first round whereby Wade lost outrightly. For those who remember his braggadacios that there won’t be any run-off, what happened is victory phase one. If voters fulfil their responsibility for the sake of their nation and democracy, Wade can still lose comfortably so as to be forced to lose in this-game-changer-like run-off.

Voters ought to deny Wade the votes he’s going to use to abuse them and their country. He’s been in power for twelve years. What can he do he did not do in these twelve years? Why should Senegalese voters prefer a centurion to a half ager Sall? If anything, Wade’s plight is squarely in the hands of voters who must punish him for ignoring them and abusing their office and constitution altogether.

Many people wonder where Wade got the guts and wits to tell former Libya strongman, Muamar Gaddafi and Ivorien one, Laurent Gbagbo to relinquish power last year while he cannot do the same now.

Due to the science of aging, we understand: Wade’s brain if wearing off. This contributes to the controversy he’s created apart from his greed to cling unto power. From what he does and says one can surely assert that this old man deserves to retire shall he deserve to be remembered honourably and favourably. Wade’s confusion can be noted in many things. He’s recently quoted saying, “I am president and father of the nation. This is what the Europeans do not understand,” he told French weekly Sunday newspaper Le Journal du Dimanche. He added, “My majority is so overwhelming that I think I will be elected with a strong percentage in the first round.” Ask him where is hallucinatory majority went in the first round. He started changing the tone and tune altogether.

It is sad to note that Wade does not know that the father of Senegal is none other than Leopord Sedar Senghor. For Wade to equate himself with Senghor, who became the first African leader to voluntarily retire when he was ten years younger than Wade, connotes mischief to the nation and Africa in general. Senghor relinquished power in December 1980, retiring in favour of the Prime Minister, Abdou Diouf. After his retirement, Senghor did not involve himself in politics till his death on 20 December 2001.

As banned candidate, Youssou N’Dour put it, “The Senegalese are not stupid.” This will be justified by the votes they will cast in the favour of Sall. Shall Wade rig their votes, they still have the chance to prove that they are not stupid by seeing to it that he is not getting away with it.

Wade is an educated man by all standards. Again, as William Feather put it, “An education is not how much you have committed to memory or how much you know. It is being able to differentiate between what you do know and what you don’t know. It is finding out what you need to know and using the knowledge once you get it.” I doubt if Wade knows where to go if he cannot willingly retire. I wonder if Wade knows where to go and get what he deserves, retirement instead of daydreaming going for a third time at such eleventh hour.

Wade, a cliffhanger, who promised crushing first round victory ended up saying this as the results were trickling in, “To all of my supporters, my allies, my sympathisers, I ask that you remain mobilised,” Wade was quoted by BBC. He added “At this very hour… everything is still possible,  victory or a run-off,” Let Senegalese make it possible for Wade to pack and hit the road to oblivion. Will the opposition goof again to let Wade win?